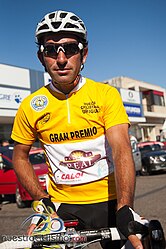 Edgardo Simón (born December 16, 1974) is an Argentine professional track and road bicycle racer. He rides for the Ironage-Colner squad, having previously competed for the Real Cycling Team on the UCI America Tour. In 2005, Simon won the UCI America Tour. In 2010 he was granted the Konex Award Merit Diploma as one of the five best cyclist of the last decade in Argentina.

Simon competed for Argentina at the 2000 Summer Olympics in track cycling in the Men's Team Pursuit event.