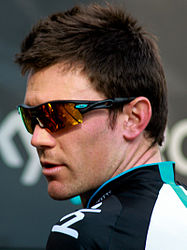 Christopher Sutton (born 10 September 1984) is an Australian former professional cyclist from Australia, who rode professionally between 2005 and 2015 for the Cofidis, Garmin–Slipstream and Team Sky squads.

Born in Caringbah, Sydney, New South Wales, Sutton trained as a carpenter. He is the son of NSW Institute of Sport's head cycling coach, Gary Sutton, and nephew of British Cycling track coach, Shane Sutton; both ex-professional cyclists. He began cycling at the age of 11, and turned professional in 2005, riding the UCI ProTour for the Cofidis team. For the 2008 season, Sutton signed with Slipstream–Chipotle, later renamed Garmin–Chipotle p/b H30. In 2010 he moved to the newly formed Team Sky, departing at the end of the 2015 season. He lives in Sylvania, New South Wales.