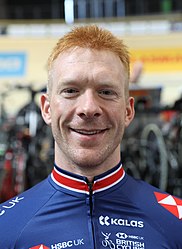 Edward Clancy (born 12 March 1985) is an English professional track and road bicycle racer who rides for the Vitus Pro Cycling Team team. On the track his specialist discipline is the team pursuit, in which he is the reigning Olympic and European champion.