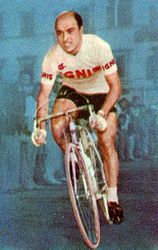 Miguel Poblet Orriols (18 March 1928 – 6 April 2013) was a Spanish professional cyclist, who had over 200 professional victories from 1944 to 1962. He was the first Spanish rider to wear the yellow jersey in the Tour de France, and in 1956 he became the first of only three riders to win stages in the three Grand Tours in the same year. (The other two are Pierino Baffi and Alessandro Petacchi.) He won the Milan–San Remo classic race on two occasions and took 26 stage wins in the three Grand Tours. His twenty-stage wins in the Giro d'Italia makes him the third most successful foreign rider in the "Giro" behind Eddy Merckx (25) and Roger De Vlaeminck (22). Poblet was of short stature who had great power, he was the first Spanish rider to be a specialist in one day races in an age when Spain only produced climbers. He had a lightning fast sprint, but could also climb well, taking the Spanish Mountain championships on three occasions and the mountainous Volta a Catalunya twice. His nickname whilst riding was "La Flecha Amarilla" (the Yellow Arrow) due to the yellow kit of his Ignis team.