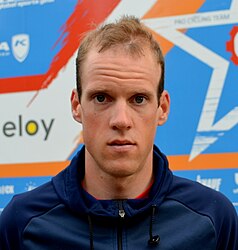 Thomas Degand (born 13 May 1986) is a Belgian racing cyclist, who most recently rode for UCI ProTeam Circus–Wanty Gobert.

He rode at the 2014 UCI Road World Championships, and was named in the start list for the 2015 Vuelta a España but he withdrew from the race after a crash. After spending the 2015 season riding for IAM Cycling, in September 2015 it was announced that he would return to his previous team Wanty–Groupe Gobert on an initial two-year contract from 2016. In June 2017, he was named in the startlist for the Tour de France.