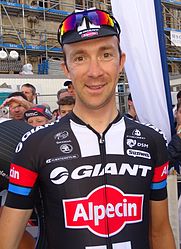 Thierry Hupond (born 10 November 1984) is a French former road bicycle racer, who competed professionally between 2008 and 2017 for the Team Giant–Alpecin and Delko–Marseille Provence KTM teams.

Born in Décines-Charpieu, Rhône, Hupond became professional with Skil-Shimano in 2008, having been a stagiaire with the team in late 2007. In the 2008 Paris–Nice, he wore the mountains classification jersey for one day on stage three, having broken away from the field during stage two, building up a lead of fifteen minutes at one point. As a result, he claimed all the mountain points available.