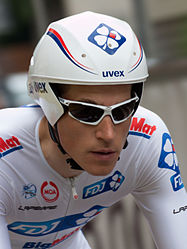 Arnold Jeannesson (born 15 January 1986 in Challans) is a French professional road bicycle racer for UCI Professional Continental team Arkéa–Samsic. He previously specialised in cyclo-cross and mountain biking. Jeannesson wore the white jersey of the highest placed rider under the age of 26 for two days in the 2011 Tour de France. In October 2015, Cofidis announced that Jeannesson would be part of their squad for 2016. Jeannesson announced in August 2017 that he would end his professional career on the road at the end of the season 2017.