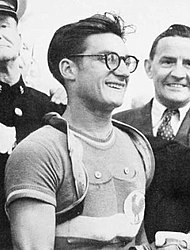 José Beyaert (1 October 1925 – 11 June 2005) was a French professional cyclist who competed during the 1940s and 1950s, and was the 1948 Olympics road race champion. Beyaert moved to Colombia in 1952 and lived there for several years where he was the coach to the national cycling team. He also competed in the Vuelta a Colombia which he won on his first attempt in 1952. He finished second the following year and eighth the year after. He also rode in the 1950 Tour de France and finished 47th overall.