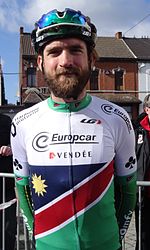 Craven started cycling seriously when he studied at Stellenbosch University. After graduating with a degree in Politics, Philosophy and Economics he moved to Switzerland in 2005 in order to pursue a cycling career.

A strong time trialist, Craven was a runner up in the 2006 African Championships, and boasts a 7th place in the time trial at the 2007 B World Championships in Cape Town.

Craven joined the Rapha Condor team for the 2009 season. Craven was the 2008 African Road Race champion, having taken the crown in Casablanca in November just two days after he had picked up a Bronze in the African Time Trial Championships. He joined Team IG–Sigma Sport for the 2012 season. He spent 2013 riding for Synergy Baku before joining the German-based Bike Aid–Ride for Help squad for 2014. In May 2014 it was announced that Craven had been signed to UCI World Tour team, Team Europcar, with effect from July. His first major goal was the last grand tour of 2014, the Vuelta a Espana.

In 2015 he became the Namibian Road Race Champion.