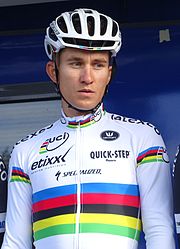 Kwiatkowski is seen as a strong all rounder, with good sprinting, time-trialling and climbing abilities allowing him to win both stage races and one day classics. His talent was shown early in his career, winning the World Junior Time Trial Championships in 2008. In 2014, Kwiatkowski became the world elite road race champion, and he was also a member of the Omega Pharma–Quick-Step team that won the 2013 World Team Time Trial Championships. In 2017 he won his first 'Monument', Milan–San Remo, while in 2018, he won Tirreno–Adriatico and the Tour de Pologne.