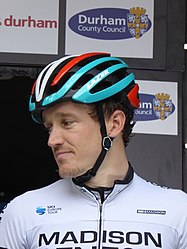 Tobyn Scott Horton (born 7 October 1986) is a British former professional road racing cyclist from Guernsey. Originally a Mountain bike specialist as a child he later switched to road racing; he was successful at Island Games and British Domestic levels, also competing in the Commonwealth Games representing Guernsey and the Tour Series, in which he took wins for a number of professional teams.