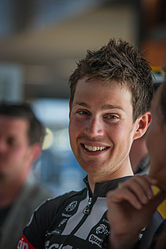 Daan Olivier (born 24 November 1992 in Oegstgeest) is a Dutch former cyclist, who rode professionally between 2014 and 2019 for the Team Giant–Alpecin and Team Jumbo–Visma squads. He competed at one Grand Tour, the 2017 Vuelta a España.

He was a member of the professional cycling team, Team Giant–Alpecin having come through the ranks at Rabobank Continental Team. He retired in June 2015, citing disillusionment with the sport, but returned in 2017 to race for LottoNL–Jumbo. He was forced to retire for a second time in 2019 due to a knee injury.