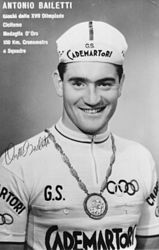 Antonio Bailetti (born 29 September 1937) was an Italian professional road bicycle racer who won a gold medal in the team time trial race at the 1960 Olympics. After that Bailetti turned professional. In 1962, he won a stage in the Tour de France and in the Giro d'Italia, after a 120 km solo escape; he repeated this achievement next year. He retired after a heavy fall in Spring 1969.