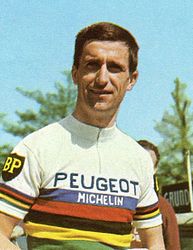 Thomas Simpson (30 November 1937 – 13 July 1967) was one of Britain's most successful professional cyclists. He was born in Haswell, County Durham, and later moved to Harworth, Nottinghamshire. Simpson began road cycling as a teenager before taking up track cycling, specialising in pursuit races. He won a bronze medal for track cycling at the 1956 Summer Olympics and a silver at the 1958 British Empire and Commonwealth Games.

In 1959, at age 21, Simpson was signed by the French professional road-racing team Saint-Raphaël–R. Geminiani–Dunlop. He advanced to their first team (Rapha–Gitane–Dunlop) the following year, and won the 1961 Tour of Flanders. Simpson then joined Gitane–Leroux–Dunlop–R. Geminiani; in the 1962 Tour de France he became the first British rider to wear the yellow jersey, finishing sixth overall.

In 1963 Simpson moved to Peugeot–BP–Englebert, winning Bordeaux–Paris that year and the 1964 Milan–San Remo. In 1965 he became Britain's first professional world road race champion and won the Giro di Lombardia; this made him the BBC Sports Personality of the Year, the first cyclist to win the award. Injuries hampered much of Simpson's 1966 season. He won two stages of the 1967 Vuelta a España before he won the general classification of Paris–Nice that year.

In the thirteenth stage of the 1967 Tour de France, Simpson collapsed and died during the ascent of Mont Ventoux. He was 29 years old. The post-mortem examination found that he had mixed amphetamines and alcohol; this diuretic combination proved fatal when combined with the heat, the hard climb of the Ventoux and a stomach complaint. A memorial near where he died has become a place of pilgrimage for many cyclists. Simpson was known to have taken performance-enhancing drugs during his career, when no doping controls existed. He is held in high esteem by many fans for his character and will to win.