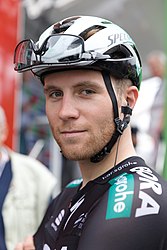 Michael Kolář (born 21 December 1992) is a Slovak Enduro mountain bike competitor. Kolář also competed as a road bicycle racer between 2012 and 2018 for the Dukla Trenčín–Trek, Tinkoff and Bora–Hansgrohe teams.

For the 2014 season, Kolář joined UCI World Tour team, Tinkoff–Saxo, from the Dukla Trenčín–Trek team. He participated to the three wins of the World Championship by Peter Sagan for Slovakia in 2015, 2016 and 2017. He was named in the startlist for the 2017 Vuelta a España.