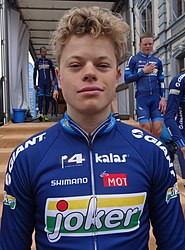 Truls Engen Korsæth (born 16 September 1993) is a Norwegian former cyclist, who competed for the Lillehammer CK, Team Joker Byggtorget and Astana teams between 2012 and 2018. He turned professional with Astana in 2017 after four years riding for Joker–Merida. During the 2018 season he suffered from illness, with his last race of the year being the Tour de Yorkshire in May, and in September 2018 he announced his retirement from competition.