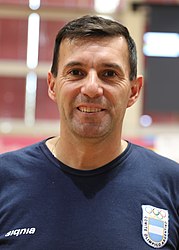 Pérez, who joined the Argentine cycling team in 1992, won the Cycling World Championships in 2004 and Men's Madison gold medal at the 2008 Summer Olympics with teammate Juan Curuchet. Walter also won two gold medals at the Pan American Games (2003 in Santo Domingo and 2007 in Rio de Janeiro).

In 2008, he received the Gold Olimpia Award as the best athlete of the year from his country with Juan Curuchet.