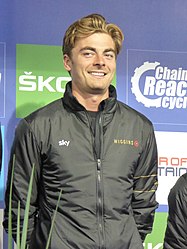 Jonathan Mark Dibben (born 12 February 1994) is a British former racing cyclist, who rode professionally between 2015 and 2020, for the WIGGINS, Team Sky, Madison Genesis and Lotto–Soudal teams. His older brother Peter Dibben is a British cycling champion on the track.

After his contract with Lotto–Soudal was not renewed, Dibben retired from professional cycling at the end of the 2020 season, and became a coach.