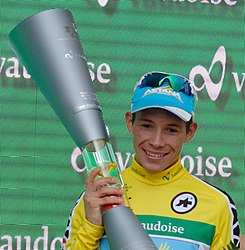 In 2016, López won his first World Tour stage race at the Tour de Suisse and achieved his maiden grand tour stage victory the following season on Stage 11 of the Vuelta a España, followed by another victory on Stage 15. He was the overall winner of the Tour Colombia and the Volta a Catalunya in 2019. In 2020, he won the "Queen" stage of the Tour de France.