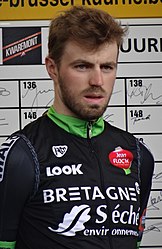 Daniel 'Dan' McLay (born 3 January 1992) is a British racing cyclist, competing in road, track and cyclo-cross, who currently rides for UCI WorldTeam EF Education First. His first season as a professional was 2015, racing for French pro-continental and 2014 Tour de France wildcard outfit Bretagne–Séché Environnement. Primarily a sprinter, McLay is also competent in the Flemish racing scene and has a particular affinity to the Northern Classics. He was named in the start list for the 2016 Tour de France.