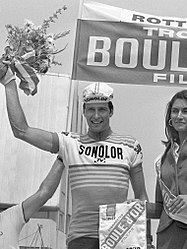 Willy Teirlinck (born 10 August 1948) is a retired Belgian road cyclist. He was professional from 1970 to 1986 and won 96 races. In 1975 he won the national title on the road. He rode Tour de France ten times and won three stages in 1972, one stage and one day in the yellow jersey as leader of the general classification in 1973, and one stage in 1976. His other victories include individual stages of the Vuelta a España, Deutschland Tour, Étoile de Bessèges, Tour de Luxembourg, Tour de l'Oise as well as one day races Grand Prix Pino Cerami, Grand Prix de Fourmies and the Grand Prix de Denain. An annual cycling event Willy Teirlinck Classic takes place in his honor in Liedekerke.