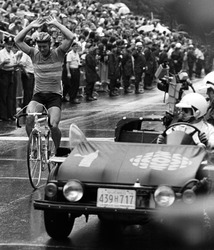 Bernt Harry Johansson (born 18 April 1953) is a Swedish former road bicycle racer, who was a professional rider from 1977 to 1981. His sporting career began with Mariestadtcyclisten. A competitor at the 1972 Summer Olympics, he represented his native country once again at the 1976 Summer Olympics in Montreal, Quebec, Canada, where he won the men's individual road race. For that performance Johansson was awarded the Svenska Dagbladet Gold Medal the same year, together with track and field athlete Anders Gärderud, who claimed gold in the men's 3000 m steeplechase in Montreal.