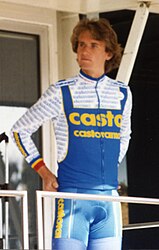 Gilles Delion (born 5 August 1966) is a French former road bicycle racer. His greatest achievements include winning the Giro di Lombardia in 1990 and the young rider classification in the 1990 Tour de France.

Early in his career, Delion was seen as a great promise, but Delion ended his career in 1996, saying that at that point doping was widespread in the cycling peloton, and that all French teams were involved. Willy Voet wrote in his book "Massacre à la chaîne" that Delion was against doping, and that other cyclists ridiculed Delion for that.