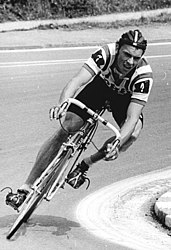 Uwe Ampler (born 11 October 1964) is a retired track and road cyclist who competed for East Germany at the 1988 Summer Olympics in Seoul, South Korea. There he won the gold medal in the men's team time trial, alongside Jan Schur, Mario Kummer, and Maik Landsmann.

In August 1999 he tested positive for steroids during the Sachsen Tour and admitted his error. His father, Klaus Ampler, was also a famous cyclist.