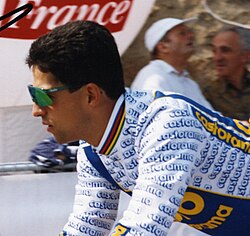 Dominique Arnould (born 19 November 1966 in Luxeuil-les-Bains in Haute-Saône, France) is a former professional road, cyclo-cross and mountain bike cyclist. As a professional, the greatest wins in Arnould’s career were the World Cyclo-Cross World Championships in 1993 and a stage win in the 1992 Tour de France. In addition Arnould was the Cyclo-Cross Champion of France five times between 1989 and 2003. He also raced professionally for the Giant mountain bike team, earning several top ten results at world championships in this discipline as well. He retired from professional cycling in 2004 and assumed the position of Directeur Sportif for the French ProTour cycling team Bbox/Bouygues Télécom, now the Continental Professional Team Europcar.