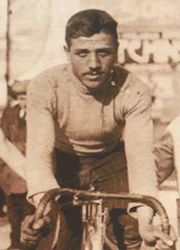 Ugo Agostoni (27 July 1893 – 26 September 1941) was an Italian professional road bicycle racer. Agostoni was professional from 1911 to 1924 during which time he won the Giro dell'Emilia, a stage in the 1912 Giro d'Italia while he was riding for the Peugeot cycling team and another stage in the 1920 Giro d'Italia. Agostoni's greatest win was in Milan–San Remo in 1914. Agostoni was killed during World War II. From 1946 onwards, a race has been organized in his honor called the Coppa Ugo Agostoni which has been won by several great cycling champions such as Felice Gimondi, Franco Bitossi, Eddy Merckx, Roger De Vlaeminck, Francesco Moser, Jan Ullrich and Gianni Bugno.