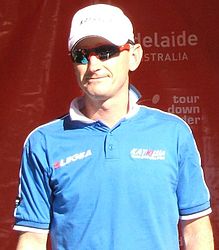 Dimitri Konyshev (Russian Дмитрий Борисович Конышев; born 18 February 1966 in Gorky) is a Russian former road bicycle racer. During the 1989 World Championship he can be seen in a rather famous photo of cycling history showing the agony of defeat in 2nd place behind Greg Lemond's display of the intensity of victory. In 1990 Konyshev would become the first ever rider from the Soviet Union to win a stage in the Tour de France. While the Soviet's would not allow their riders to join the professional teams until a short while before the end of the Cold War in the 1991 Tour de France Soviet riders had remarkable success winning 5 stages. One by Viatcheslav Ekimov, two by Djamolidine Abdoujaparov who also won the Green Jersey and two stage wins by Konyshev. His victory in stage 17 also made him the last rider for the Soviet Union to win a Tour de France stage.

All total in his professional career Konyshev would win nine Grand Tour stages becoming one of the few riders to win a stage in all three Grand Tours. He won 4 apiece in the Tour de France and the Giro d'Italia, and he also won a single stage in the Vuelta a Espana. He followed his silver medal at the 1989 World Championship with a Bronze medal in 1992 at Benidorm and later in his career during the 2000 Giro d'Italia he won the Points Classification, as well as the overall Combativity Award.