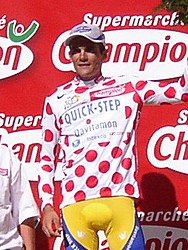 Richard Virenque (born 19 November 1969) is a retired French professional road racing cyclist. He was one of the most popular French riders with fans for his boyish personality and his long, lone attacks. He was a climber, best remembered for winning the King of the Mountains competition of the Tour de France a record seven times, but he is best known from the general French public as one of the central figures in a widespread doping scandal in 1998, the Festina Affair, and for repeatedly denying his involvement despite damning evidence.