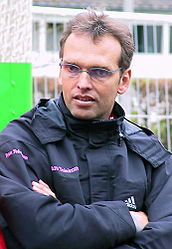 Olaf Ludwig (born 13 April 1960 in Gera, Bezirk Gera) is a former German racing cyclist. His career began at the SG Dynamo Gera / Sportvereinigung (SV) Dynamo. As an East German, he raced as an amateur until reunification of Germany allowed him to become professional with Panasonic team. As a sprinter, the highlight of his career was winning the points classification in the 1990 Tour de France. Other highlights include the Olympic road race in Seoul in 1988, a record 38 stage victories in the Peace Race, winning the Amstel Gold Race in 1992, and podium placings in the Paris–Roubaix. He also won the 1992 UCI Road World Cup. In 1992 he won the Champs Elysees stage in the Tour de France and won the third Tour stage of his career the following year.

In 1993 he joined Team Telekom, later T-Mobile Team. On retirement in 1996 he took up public relations for the team. He subsequently became principal team manager, but his involvement with the team finished at the end of 2006.