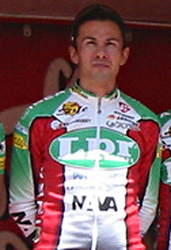 Pavel Sergeyevich Tonkov (Russian: Павел Сергеевич Тонков; born February 9, 1969 in Izhevsk) is a former professional road racing cyclist from Russia. His talents were first showcased when winning the world junior title as part of the Soviet Union team in 1987. This alerted the world to his talents, and he turned pro in 1992 with the RUSS-Baïkal team. His biggest success was the overall win in the 1996 edition of the Giro d'Italia. He also placed 2nd in the following two editions of the Italian race.

Throughout much of his career, he was a client of the controversial Michele Ferrari.

He lives in Córdoba, Spain where he manages a hotel.