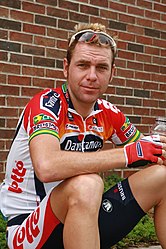 Hendricus "Henk" Vogels (born 31 July 1973, in Perth) is an Australian former professional road bicycle racer who retired from competition at the end of the 2008 season, riding with the Toyota-United Pro Cycling Team. He won the Australian national road race title in 1999. He was an Australian Institute of Sport scholarship holder. He was subsequently directeur sportif of the Fly V-Successful Living team. Vogels also provides expert opinion for SBS Cycling Central. Vogels served as sports director of the Drapac Professional Cycling team in 2014, however he left the team at the end of the season in order to take a break from the sport in 2015 and spend more time with his family.

His father, Henk Vogels Sr, was a former Australian cyclist who competed in the team pursuit at the 1964 Summer Olympics.