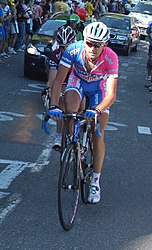 Marzio Bruseghin (born 15 June 1974 in Conegliano, Treviso) is an Italian retired professional road bicycle racer, who competed as a professional between 1997 and 2012. His best achievement was winning the 2006 Italian time-trial championship, as well as winning two time trial stages in the Giro d'Italia. In 2008 he completed all three Grand Tours, including a podium finish (Giro) and a top 10 finish (Vuelta).