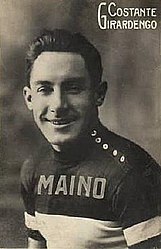 Costante Girardengo (Italian pronunciation: [koˈstante dʒirarˈdeŋɡo]; 18 March 1893 - 9 February 1978) was an Italian professional road bicycle racer, considered by many to be one of the finest riders in the history of the sport. He was the first rider to be declared a "Campionissimo" or "champion of champions" by the Italian media and fans. At the height of his popularity in the 1920s he was said to be more popular than Mussolini and it was decreed that all express trains should stop in his home town Novi Ligure, an honour only normally awarded to heads of state.

His career achievements include two wins in the Giro d'Italia, six wins in Milan–San Remo, three wins in the Giro di Lombardia; he was also Italian road race champion on nine occasions. His professional career was extensive, lasting from 1912 to 1936 and was interrupted by World War I which robbed Girardengo of some of his best years. He was ranked number one in the World in 1919, 1922, 1923, 1925 and 1926. He raced almost exclusively in his home country as was the custom in those days, as foreign travel was not easy. Girardengo was of only small stature and this earned him the nickname "The Novi Runt".