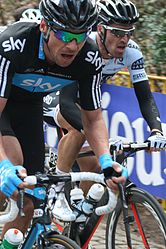 Jeremy Hunt (born 12 March 1974) is a retired British road racing cyclist who raced for numerous years mainly a sprinter. Hunt was the British national road race champion in 1997 and in 2001.

Hunt was born in Canada and grew up in England, firstly in Bury before moving to Devon. His father had been an amateur racing cyclist, and as a teenager in Devon Hunt was coached by former Tour de France rider Colin Lewis. He pursued his career in northern France before turning professional.

He made his professional cycling debut for Banesto in 1996, and rode there for 4 seasons, when in 2000 he began a 3-year stint at BigMat–Auber 93, taking a win against Mario Cipollini in a stage of the Tour Méditerranéen in his first season with the team. He spent 1 season for MBK-Oktos until in 2004 he joined Mr. Bookmaker–Palmans–Collstrop. Hunt joined Crédit Agricole in 2008, following the demise of the MrBookmaker, now called Unibet.com. In 2009 he joined Cervélo TestTeam, where he made his Tour de France debut in 2010 at the age of 36, having previously turned down the opportunity of racing in the Tour whilst at Banesto in 1997. In October 2010, after the demise of the Cervélo team, he was announced as a member of Team Sky's 2011 line-up.

He is now director sportif of Azerbaijani Continental team Synergy Baku Cycling Project. He is the half-brother of racing cyclist Joshua Hunt.