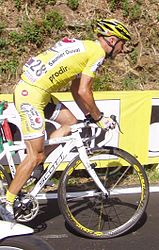 Leonardo Piepoli (born 29 September 1971 in La Chaux-de-Fonds, Switzerland) is a former Italian professional road racing cyclist. He most recently rode for Saunier Duval–Scott on the UCI ProTour, but had his contract suspended in July 2008 during the Tour de France amid allegations of the use of the blood boosting drug EPO in the team. He was later suspended for two years, which effectively ended his career.