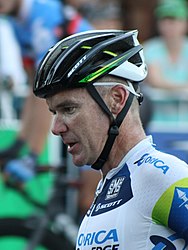 Stuart O'Grady (born 6 August 1973) is a retired Australian professional road bicycle racer, who rode as a professional between 1995 and 2013. A former track cyclist, O'Grady and Graeme Brown won a gold medal in the Men's Madison at the 2004 Summer Olympics. O'Grady also won Paris–Roubaix in 2007. O'Grady competed in the Tour de France from 1997 and contended for the points classification in the Tour de France known as the green jersey, finishing second in the 1998, 1999, 2001 and 2005 races. He wore the yellow jersey of general classification leader in 1998 and 2001.

With his participation in the 2013 Tour de France, he tied George Hincapie's record of 17 participations in the Tour de France. However, Hincapie was removed from three of his 17 starts for his part in the Lance Armstrong doping scandal, and O'Grady himself admitted having been assisted by illicit erythropoietin (EPO) use at least on the 1998 Tour de France (the Dutchman Joop Zoetemelk holds the absolute records of completed Tours de France, with 16 from 1970 – 1986). He was awarded the Order of Australia Medal. O'Grady is the current Race Director of the Tour Down Under.