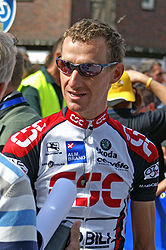 Kurt Asle Arvesen (born 9 February 1975) is a Norwegian former professional road bicycle racer, who competed as a professional between 1998 and 2011. Arvesen is from Eresfjord, Nesset. He won the Norwegian National Road Race Championships five times, as well as stages in each of the three Grand Tours.

After retiring as a rider, Arvesen became a coach with Team Sky. He currently works as a directeur sportif for UCI ProTeam Uno-X Pro Cycling Team.