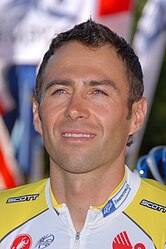 Gilberto Simoni (born 25 August 1971 in Palù di Giovo, Trentino) is an Italian former professional road bicycle racer, most recently for Lampre–Farnese Vini. Simoni is twice winner of the Giro d'Italia cycling race (2001 and 2003 editions). Simoni might have won a third Giro, but in 2002 he tested positive for cocaine and was withdrawn from the race by his Saeco team – he was later cleared of any doping violation by the Italian Cycling Federation. Aside from this incident in 2002 he finished on the podium in every other Giro between 1999 and 2006.

Simoni is a native of Palu di Giovo, and was considered a climbing specialist. His final race as a professional road cyclist was the 2010 Giro d'Italia, which he finished in 69th place overall, 2:40:14 behind another two-time winner Ivan Basso.