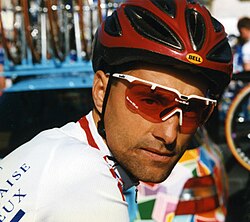 Mauro Gianetti (born 16 March 1964 in Lugano) is a Swiss directeur sportif, and a former rider in professional road bicycle racing. Gianetti was employed as team manager for the Saunier Duval–Prodir cycling team throughout its existence between 2004 and 2011.

Several riders have been sanctioned for doping violations that occurred during his tenure as directeur sportif, including Riccardo Riccò and Juan José Cobo. Gianetti currently sits on the Board of Directors of UAE Team Emirates.

With over 30 professional victories, Gianetti's biggest career accomplishments as a rider include winning the 1995 Liège–Bastogne–Liège and Amstel Gold Race and representing Switzerland at the 2000 Summer Olympics.

His son Noé Gianetti was also a professional cyclist.