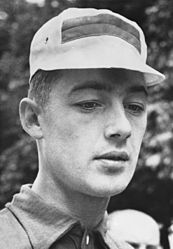 Charly Gaul (8 December 1932 – 6 December 2005 in Luxembourg City) was a Luxembourgian professional cyclist. He was a national cyclo-cross champion, an accomplished time triallist and superb climber. His ability earned him the nickname of Angel of the Mountains in the 1958 Tour de France, which he won with four stage victories. He also won the Giro d'Italia in 1956 and 1959. Gaul rode best in cold, wet weather. In later life he became a recluse and lost much of his memory.