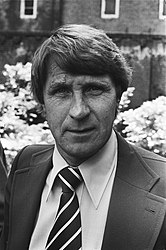 Peter Post (12 November 1933 – 14 January 2011) was a Dutch professional cyclist whose career lasted from 1956 to 1972. Post competed in road and track racing. As a rider he is best remembered for Six-day racing, having competed in 155 races and won 65. Because of this success he was known as “De Keizer van de Zesdaagse” or “The Emperor of the Six Days”. In road racing his main achievements were winning the 1964 Paris–Roubaix and becoming national road race champion in 1963. He was on the podium three times at the La Flèche Wallonne but never won. Post’s other nickname was “de Lange” or “Big Man” because he was tall for a cyclist. After retiring from racing he had success as a Directeur sportif. Peter Post died in Amstelveen on 14 January 2011.