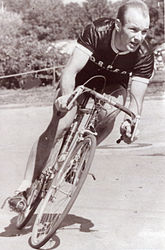 Dieter Kemper (11 August 1937 – 11 October 2018) was a German cyclist who competed professionally between 1961 and 1980. During his career he won one UCI Motor-paced World Championships in 1975, seven European titles and 26 six-day road races. He finished three times in third place at world championships, in motor-paced racing and individual pursuit disciplines.

Before starting to train in cycling in 1957 he was a successful water polo player with SV Westphalia in Dortmund. In 1961 he started in the Tour de France but had to withdraw early due to a crash.

He had another bad crash on 5 December 1976 during a motor-paced race in Cologne, when he was hit hard in the head and spent nine days in a coma.

After retiring from cycling he moved to North Holland with his wife, who later died of brain tumor in 2008.