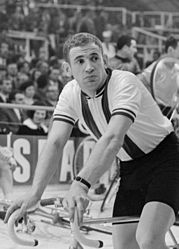 Theo Verschueren (born 27 January 1943) is a retired Belgian cyclist. He had his best achievements in motor-paced racing, in which he won the world championships in the professionals category in 1971 and 1972 and finished second in 1969, 1970 and 1974. During his career Verschueren took part in 67 six-day road races, winning the race of Antwerp in 1968 and 1972.

He married the daughter of Belgian cyclist Petrus Van Theemsche. He is not related to Adolph Verschueren, another motor-paced racing world champion from Belgium.