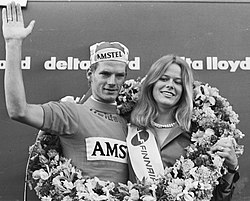 Van Vliet's biggest success was the 1983 Gent–Wevelgem. He also won the seventh stage of the 1979 Tour de France. After his career, he became the director of the only Dutch cycling classic, the Amstel Gold Race. He is not related to another Dutch cyclist of the 1980s, Teun van Vliet.