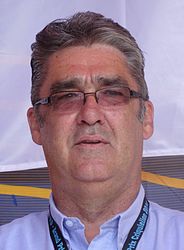 Claude Criquielion (11 January 1957 – 18 February 2015) was a Belgian professional road bicycle racer who raced between 1979 and 1990. In 1984, Criquielion became the world road race champion in Barcelona, Spain on a gruelling course. He had five top-ten finishes in the Tour de France.

Criquielion was well placed to win a medal in the 1988 world road race championship in Belgium. However, he crashed in sight of the line when another competitor, Steve Bauer of Canada, clashed with him. The third rider, Maurizio Fondriest, went on to win. Bauer was disqualified and Criquielion sued Bauer for assault, asking for $1.5 million in damages in a case that lasted more than three years before the judge ruled in Bauer's favor.

At the national championship race in 1985, he tested positive for Pervitin, but received no repercussions. The head of the laboratory at Ghent University, which had administered the analysis, subsequently resigned his post in the Medical Commission of the Belgian Cycling Association (KBWB) in protest.

Criquielion was directeur sportif of the Lotto–Adecco team from 2000 to 2004. His son, Mathieu Criquielion, turned professional for the Landbouwkrediet-Colnago team in 2005; Claude Criquielion became the team's manager.

From 2006 until his death Criquielion was an alderman for the liberal MR in Lessines.

During the night of 15-16 February 2015, Criquielion suffered a cerebrovascular accident and he was hospitalized in critical condition. Criquelion died at 9:00 AM on 18 February 2015 in a hospital in Aalst.