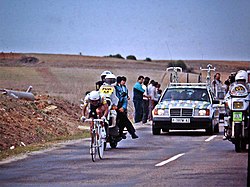 Fabio Enrique Parra Pinto (born November 22, 1959 in Sogamoso, Boyacá) is a retired Colombian road racing cyclist. Parra was successful as an amateur in Colombia, winning the Novatos classification for new riders or riders riding their first edition of the race, and finishing 14th in the 1979 Vuelta a Colombia and then the General classification in the 1981 Vuelta a Colombia. He also competed in the individual road race event at the 1984 Summer Olympics.

Parra turned professional for the first Colombian cycling team, Café de Colombia, in 1985. He was a professional from 1985 to 1992 and won stages in the Tour de France and Vuelta a España. His success occurred at the same time as his compatriot Luis Herrera. While Herrera won stages and the King of the Mountains competitions in the grand tours, Parra could contend for the overall classification. His greatest achievements were a third place in the 1988 Tour de France, highest placing of a South American for 25 years, until his countryman Nairo Quintana finished second in the 2013 Tour de France, and, in the following year in the Vuelta a España, finishing second to Pedro Delgado at 35 seconds.