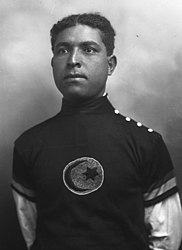 Ali Neffati (22 January 1895 in Tunis – 19 April 1974 in Paris) was a Tunisian cyclist who was professional between 1913 and 1930. He is known for being the first African to participate in the Tour de France, when he participated in the 1913 edition. He also was in the 1914 Tour de France, but didn't finish either of them. In the 1914 Tour, he was hit by a car from the organization, and could not continue.

Neffati's cycling career began in 1908 in Tunisia, where he won several track championships. In 1913 he accepted an invitation to the Tour de France. He was iconic for wearing a fez instead of the traditional cap. Despite the setback caused to his career by the World War I, he returned to racing in 1918 and became a regular at major races of the time. He was one of 87 riders to compete in the Circuit des Champs de Bataille in early 1919, the stages of which crossed towns devastated by World War I; the race is remembered as the toughest in cycling history.