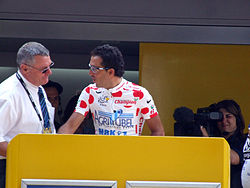 Juan Miguel Mercado Martínez (born 8 July 1978 in Armilla, Granada) is a Spanish professional road bicycle racer who turned professional with Vitalicio Seguros in 1998. At the Tour de France, Mercado won Stage 18 at the 2004 Tour and captured a surprise win on Stage 10 (the first mountain stage) of the 2006 Tour de France in an early breakaway with Cyril Dessel (Ag2r Prévoyance).

On 19 February 2020, media reports suggested that Mercado was a suspect in a police investigation into a "burglary gang" in the city of Granada.