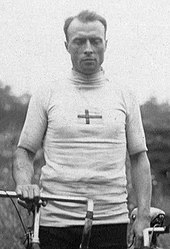 Axel Wilhelm Persson (23 January 1888 – 2 September 1955) was a Swedish cyclist. He competed in the road race at the 1912 and 1920 Summer Olympics and won a gold and a silver medal with the Swedish teams. Individually he finished 9th and 12th, respectively.

Person won nine to eleven Swedish titles on the road and track, both in the sprint and long-distance events. In 1919, he also became Scandinavian champion in the road race.