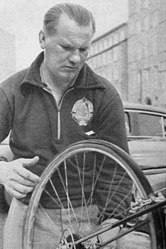 Prosenik grew up in a poor family, as his father became disabled after a mining accident. In 1930 he moved to Zagreb and worked there as a workshop mechanic and then as a car mechanic. After retiring from competitions he became a cycling coach and a sports administrator.